I was lucky enough to find a really cheap ticket to Miami so my best friend and I decided to drive down to Key West for a relaxing weekend. And that is exactly what we did, RELAX. I think this was the first trip where there was nothing on the agenda besides which beach will we lay on and where will we eat! 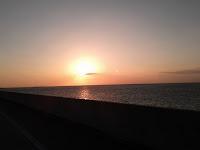 The drive down from Miami is about 3 hours and is absolutely beautiful after the one and a half hour mark. The Gulf of Mexico surrounds you as you wind down to the tiny island. We were lucky enough to do it during sunset so it made it even better. Once we arrived, we quickly changed and went straight to the water for a quick spliff. Luckily, you can choose from the Atlantic ocean or the Gulf because each is only about a 20 min walk away from the other. We had the Atlantic in our backyard.


Duval street, which is really the main strip, is filled with bars, restaurants, and everybody really! I really think this city is the Cancun for the older crowd. We saw way too many old men trying to pick up younger chicks and loud drunken moms on the floor. Duval Street is also home to what probably became a daily gluttonous treat for us- Flamingo Crossing, delicious homemade ice cream served in massive portions and some even with alcohol! This is also where we enjoyed amazing scallops at Nine One Five. They were so good that after we finished our dinner we seriously contemplated having another plate!

Next were the beaches where we thoroughly enjoyed the sun after experiencing a prolonged winter in NYC. Though, the white sand beaches were a bit rocky, they were still beautiful and peaceful. We were there everyday for as long as we could possibly be without our skin peeling. Since the island is so small, we opted to rent bicycles to get around and there was something really tranquil about it. Initially, I was scared that I was going to fall or get run over but the locals are use to bike traffic and nothing of the sort happened.

We did encounter one not so racially tolerant woman but besides her, the southernmost point in America was definitely very good to us. It was exactly what we needed and although didn't let us detox our bodies, we definitely left rejuvenated. 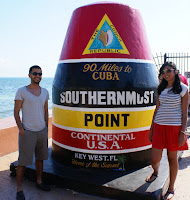