A shuttle picked up Nikunj and I for our bus trip from Vang Vieng to Luang Prabang. A minute into the ride, we realized the bus company was actually only two blocks away from our hotel. Before you judge us for being lazy, I need to remind you about Pi Mai, Laotian New Year. Even though we were in the car, it did not stop the partygoers from spraying us non-stop. When we finally got to the bus, all 10 of us made a run for it because otherwise we were inviting people to drench us with water.

Our bus driver was young and eager to reach our destination as quickly as possible. He opted to take us through a newly opened road through the mountains rather than the traditional 7 hour journey around the mountains. The new road saved us about 3 hours. The constant uphill turns were a bit difficult for our minibus so each time we conquered a hill, we had to get out and let the engine cool down for a few minutes. This wasn’t so bad because the landscape around us was stunning every time.

We reached Luang Prabang around 7pm and headed straight to our hotel. Vangsavath was the perfect choice for us. Even though it wasn’t in the heart of the main strip, it was just the right distance away. They provided a free shuttle to and from the center, free bikes, free breakfast, unlimited tea and coffee and a beautiful zen garden that allowed us to relax whenever we wanted. The mother and son that ran the hotel were also extremely kind and hospitable. After they went over the map of the city with us, we got on the shuttle and headed straight to the local night market.

The night market is where you go to shop and to eat. There is one little side street that is filled with food stalls that appeal to both vegetarians and meat lovers. It is also ridiculously cheap. We grabbed some dinner and ate with tourists and locals on a communal table. It was a perfect way to end the day. We were tired from our earlier hike and wanted to decompress so after a quick walk through the market, we headed back.

We woke up the next morning and were sore all over. Man were we out of shape! We decided to take it easy and just enjoy the day so the plans for the day involved: breakfast and observing the New Year’s celebrations. Sleepy Luang Prabang is anything but quiet during this annual celebration. We saw people dancing and drinking on the street. The young and the old were rejoicing and celebrating the New Year. 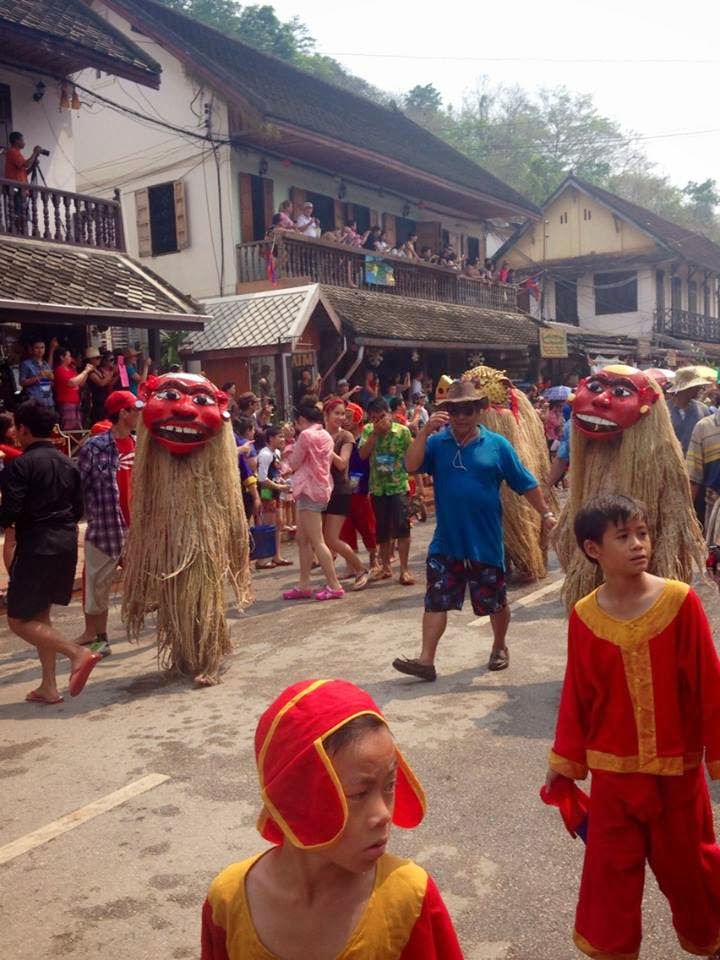 We headed to the main square to watch the New Year's parade and had no idea what we were getting ourselves into! Just walking to the strip involved constant buckets of water and super soakers. We were attacked as soon as were arrived and it did not get easier each time more water came our way. We took shelter in a restaurant and observed the parade over lunch. The parade featured prominent locals, monks, Miss Luang Prabang and a lot of festive dancers. Once it was over, we had to brave the crowds again in order to head back to the hotel to change and dry up. I thought I was clever by putting on a poncho but an onlooker ripped it off and said I was cheating! We were so excited to find a taxi and escape the madness.

The next morning, we got up bright and early at 5 am to witness the morning alms ceremony. This is probably the one thing that comes up as the must do in Luang Prabang but for me it was my least favorite part. Everyone comes to see the monks and you could see that they don't actually enjoy the tourists and the cameras in their faces. The onlookers take away from the spiritual ritual. Even though I wasn't in their faces, I still felt guilty for being there. The whole thing only lasts about 15 minutes and thankfully ends quickly. 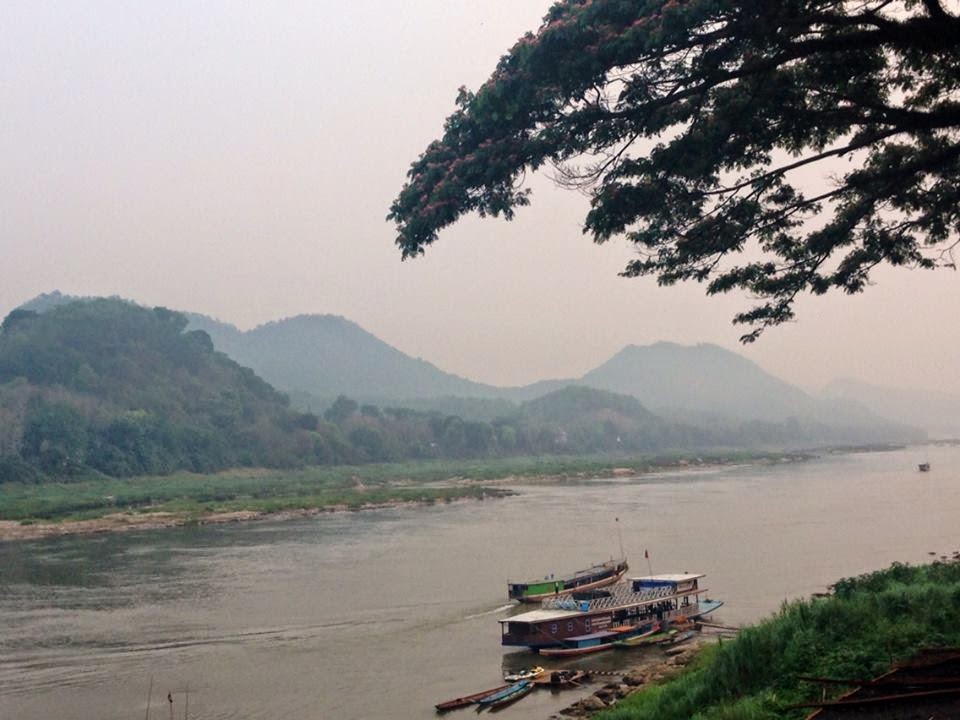 The best part about this morning was observing the city. It was so quiet and different from how we had seen it over the last 2 days. The UNESCO world heritage site was back to normal. Nikunj and I decided to take advantage of this and walked along the river. I fell in love. It was so beautiful and so peaceful. We went back to the hotel for breakfast and I couldn't get the streets out of my mind so while Nikunj napped, I took a bike and went back to town. I rode from the Mekong to the Nam Khan River and saw the locals getting ready to start their day by setting up their restaurants and shops.  I had read about the old French architecture but was now finally able to see it while witnessing the sunrise. It was a perfect morning.

Once I was done, I headed back and took a nap before our excursion to Kuang Si Falls. The base of the falls was filthy and overcrowded. We instantly regretted our decision and could not understand why the locals would treat a local treasure this way. We decided to hike up in hopes of a better view and cleaner surroundings and I'm so glad that we did. It was a huge difference. We sat at the edge and enjoyed the sounds of the water crashing down. It was such a calming experience. 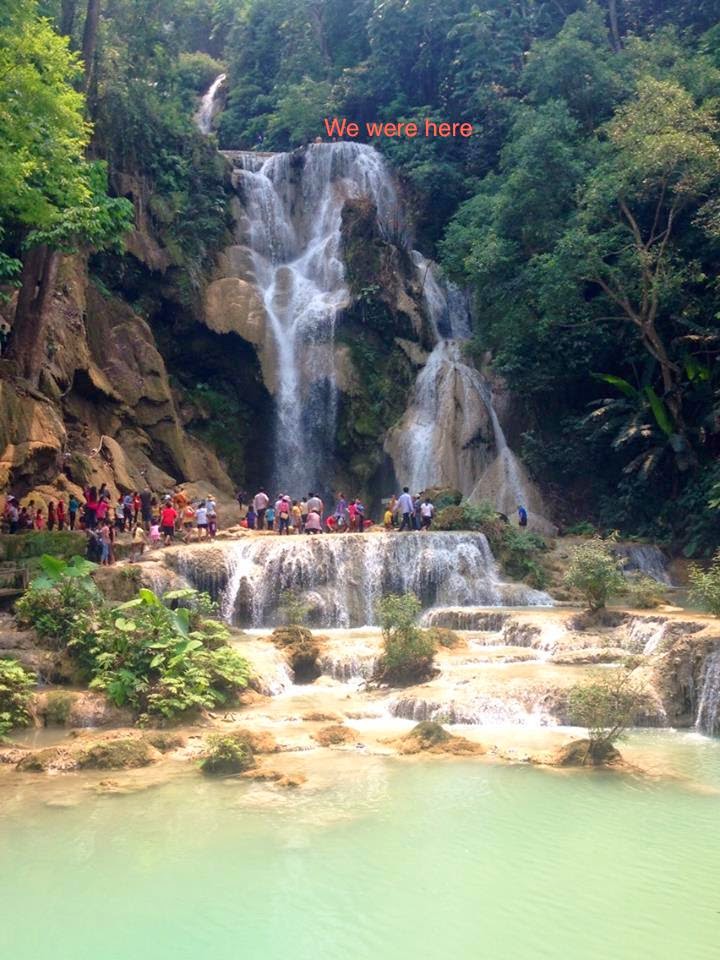 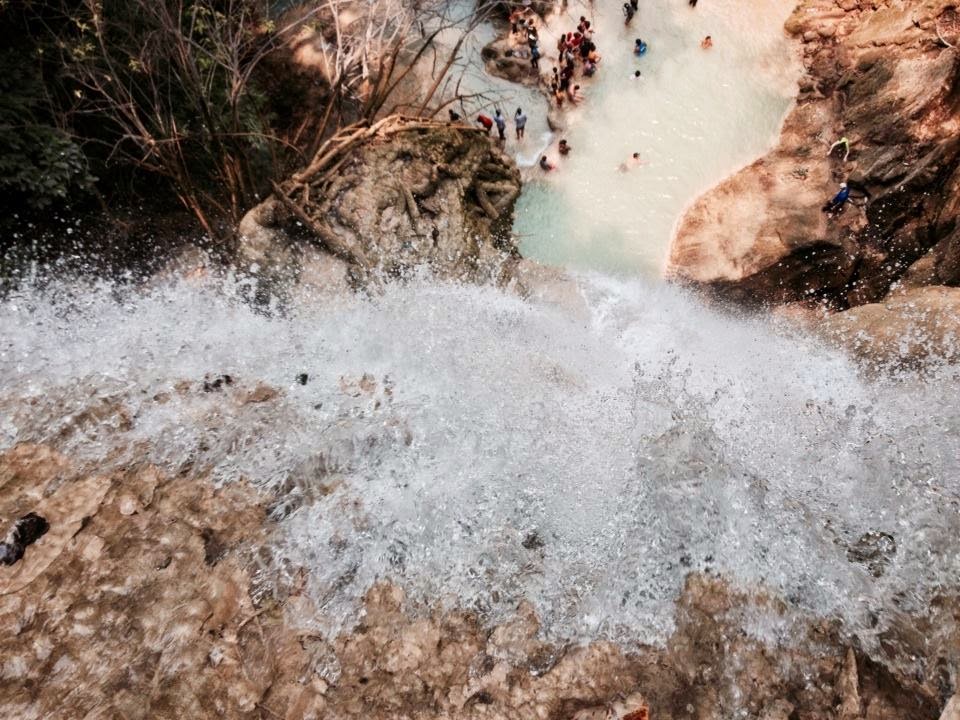 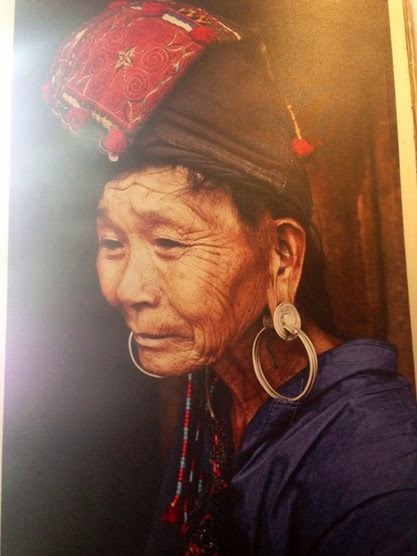 Since we barely had a chance explore the town, we used the next day to do just that. We walked from one end to the tip of the peninsula. During the walk, a postcard outside a coffee shop caught my eye.  The cafe was called Big Tree Cafe and it featured Adri Berger's work. I was so engrossed by his portraits. He actually sat down and explained a lot of it to us which just made the experience a whole lot better.  He had been in Laos for over 7 years and explored most of the country by boat. His shots captured a lot of the local tribes and their customs. Seeing his work made me want to come back to Laos and explore the mountains because it was all so different from anything we had seen on our trip. I didn't buy any of  the portraits but hope to be able to afford one some day soon. I did get a postcard for my postcard wall :) 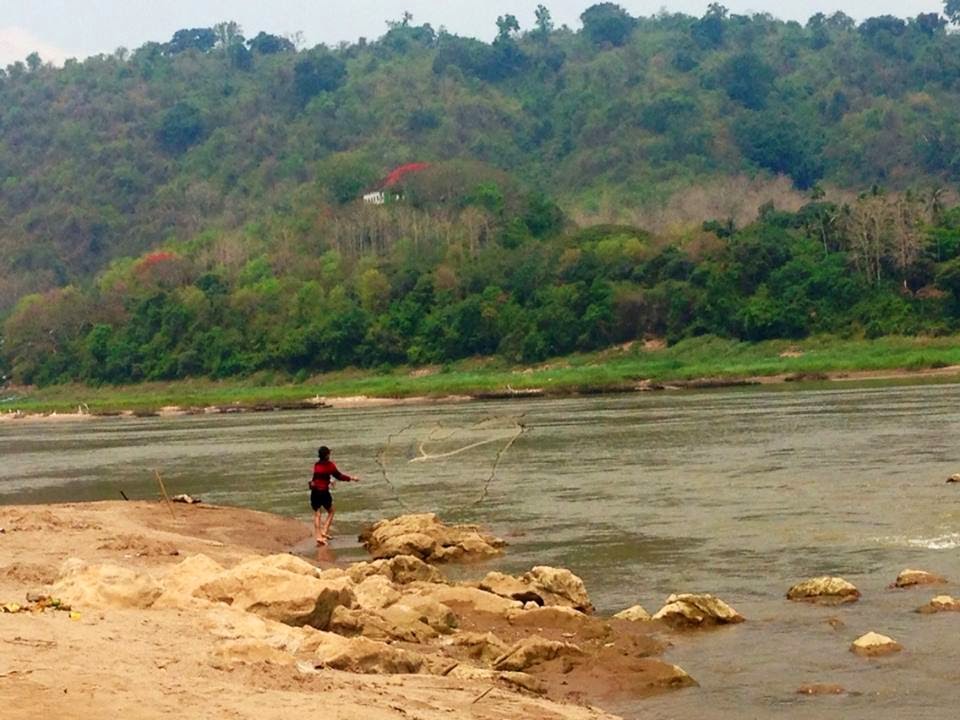 Next, we visited Xieng Thong temple. It was unlike any other temple I had ever seen. The designs on the exterior walls were really unique and very colorful. 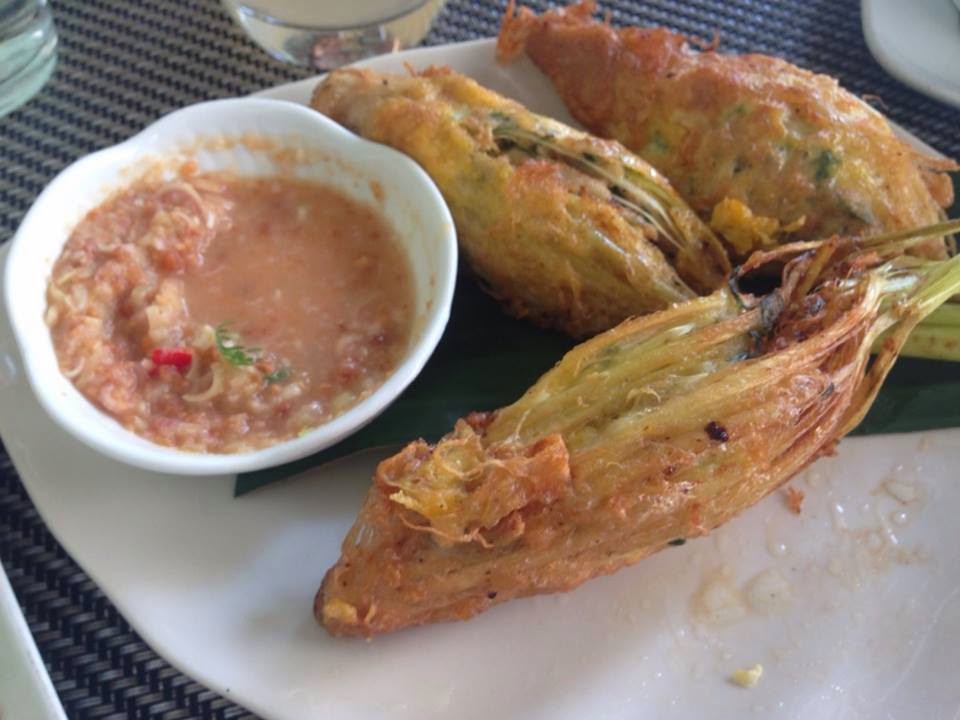 After that we walked to Tamarind for lunch and lucky for us it was finally open. We had been trying to eat here since we arrived but it was closed for the holidays. The restaurant came highly recommended and after our absolutely delicious lunch, we understood why. I had stuffed chicken with lemongrass accompanied by brown sticky rice and lime juice. It was so tender and flavorful. You need to slowly peel the lemongrass in order to get the chicken out. Nikunj had another one of their popular dishes, papaya salad. It was such a treat. The view didn't hurt either, the restaurant overlooks Nam Khon River.


We decided to keep treating ourselves and got massages next. I don't know if it was brave or stupid on our part to request a traditional massage. Oh my god does it hurt. Each sore spot felt so much worse when they "massage" it. But my body did feel great afterwards. The amount of things that cracked were kind of scary but my pain did disappear for a few days. Since we could barely walk afterwards, we headed back to the hotel for a nap. Vacations are the best specifically because of naps! 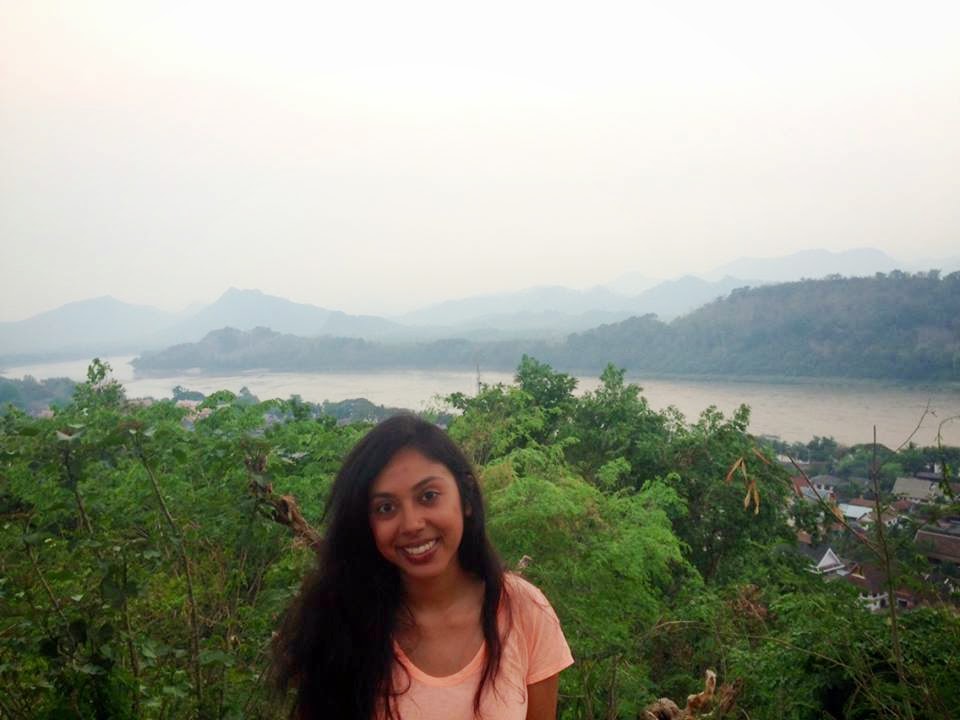 In the evening we visited Phu Si, a hill in the middle of the city that houses a temple on top. It has 360 panoramic views of the city and the surrounding mountains. Unfortunately, it was pretty cloudy when we went but the views were still beautiful. I can't imagine how they could get any better. We spent a good hour just staring and admiring the view.

Our last day in Luang Prabang was spent on a boat. We signed up for a three hour boat ride on the Mekong. This is where the pitfalls of traveling in Asia came in to play. Our boat stopped working twice, once on the way to Pak Ou Caves and once on the way back to Luang Prabang. There was absolutely nothing we could do about it. The driver would bang a hammer on the engine in hopes of making it start. We had to wait for other boat drivers to help us and it was really scary to be at the mercy of others. To add to the stress, our flight back to Vientiane was later in the evening so we kept thinking we would miss our flight. In the end it all worked out and it served as a reminder that when in Asia, you just need to go with the flow. 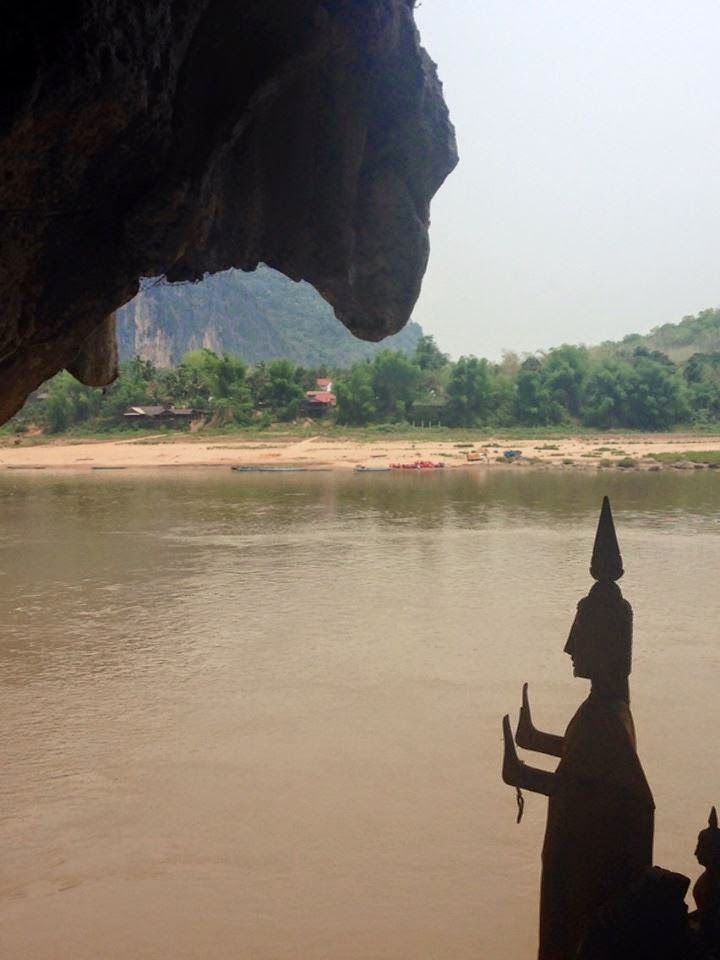 Pak Ou Caves house thousands of Buddha statues from the 16th century til now. They alone aren't worth the boat trip but the landscape makes it worthwhile. We saw elephants, local tribes and lots of fishermen out on the river. It was a very relaxing experience. A lot of people opt to take a boat ride on the Mekong for 2-3 days to really explore the local towns.

I realized that this was the first time in a while I spent 5 full days in a city and it still didn't feel like enough. There is something mystical about the mountains of Laos and I can't wait to go back and see more.
at August 03, 2014