It has officially been a month since I moved to Cambodia. At times it is a little hard to believe because it still feels like I just got here. I have been on trips with work every week and that has definitely made the weeks go by much quicker. 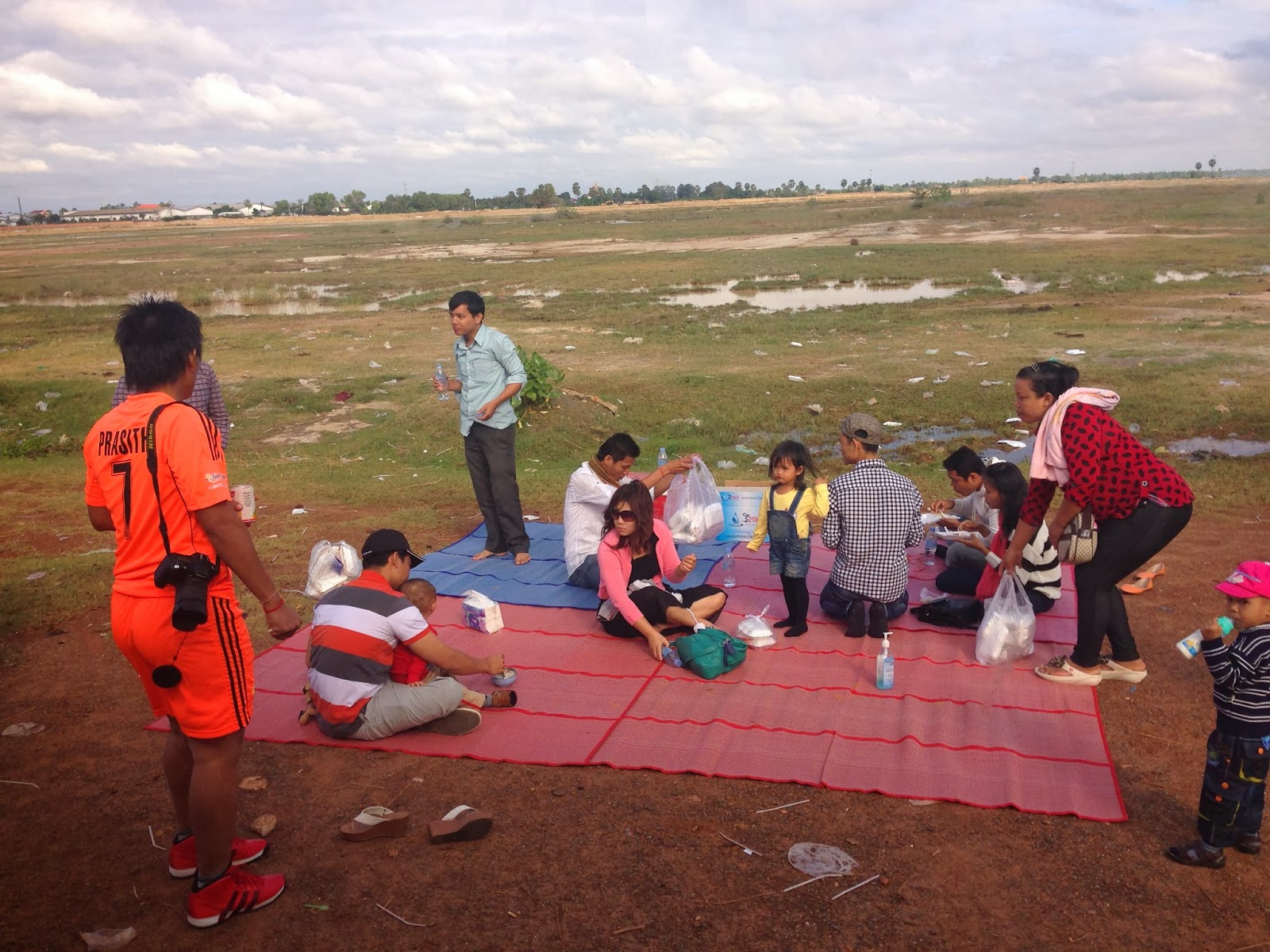 We had our staff retreat this week. The destination was Sihanoukville. We left at 7:30 am on Wednesday morning. Most of the local staff  brought their spouse and children along for the trip. The children were quite entertaining during the journey. Sihanoukville is only 3.5 hours from Phnom Penh. All of the foreigners, including myself were expecting to arrive at the hotel by the afternoon. We actually got there at 5:30pm! What we didn’t know is that Cambodians like to make a thing out of EVERYTHING. It worked out for me because I got to see new sights but it was still a little frustrating. Our first stop was for breakfast. We stopped on the side of the highway and put down some mats for our group of 35. The menu was roasted duck with rice or roasted chicken with rice. I just had some rice because I can't handle meat that early in the morning.

Our next stop was a holy site for Buddhists. It was a beautiful valley where Buddhists believe a spirit lives. Almost all the locals got off to pray and to take some pictures. Next, we headed to lunch at a resort. A resort in Cambodia does not mean what does in the States. Here a resort implies a hut with hammocks and a stopping point for food. Unfortunately for us, the bridge to our resort was damaged so we took the long way there. This involved an unpaved road, loads of bumps and another 2 hours added to our trip. Lunch included Tom Yum Soup (hot & sour) and roasted chicken.  It was all delicious! The good thing about resorts is that after a meal you are expected to lounge around in the hammocks for forty minutes to an hour. So we did just that before heading to Sihanoukville.

After some more bathroom breaks we finally arrived at the hotel  two hours behind schedule so we nixed the team building activities and headed straight to the beach for dinner. This time the menu was seafood fried rice, soup, bbq lamb, squid and beef. This was exactly what we all needed after a long day on the bus. We ended the night with Christmas gifts. Everyone drew a number and the prizes included carry on suitcases, kitchen appliances and cash. I won the top prize of $40! It was a great way to start the retreat.  Anjana’s husband (Ujwal) and sister (Srijana) arrived a little after dinner so I explored afterwards with them. 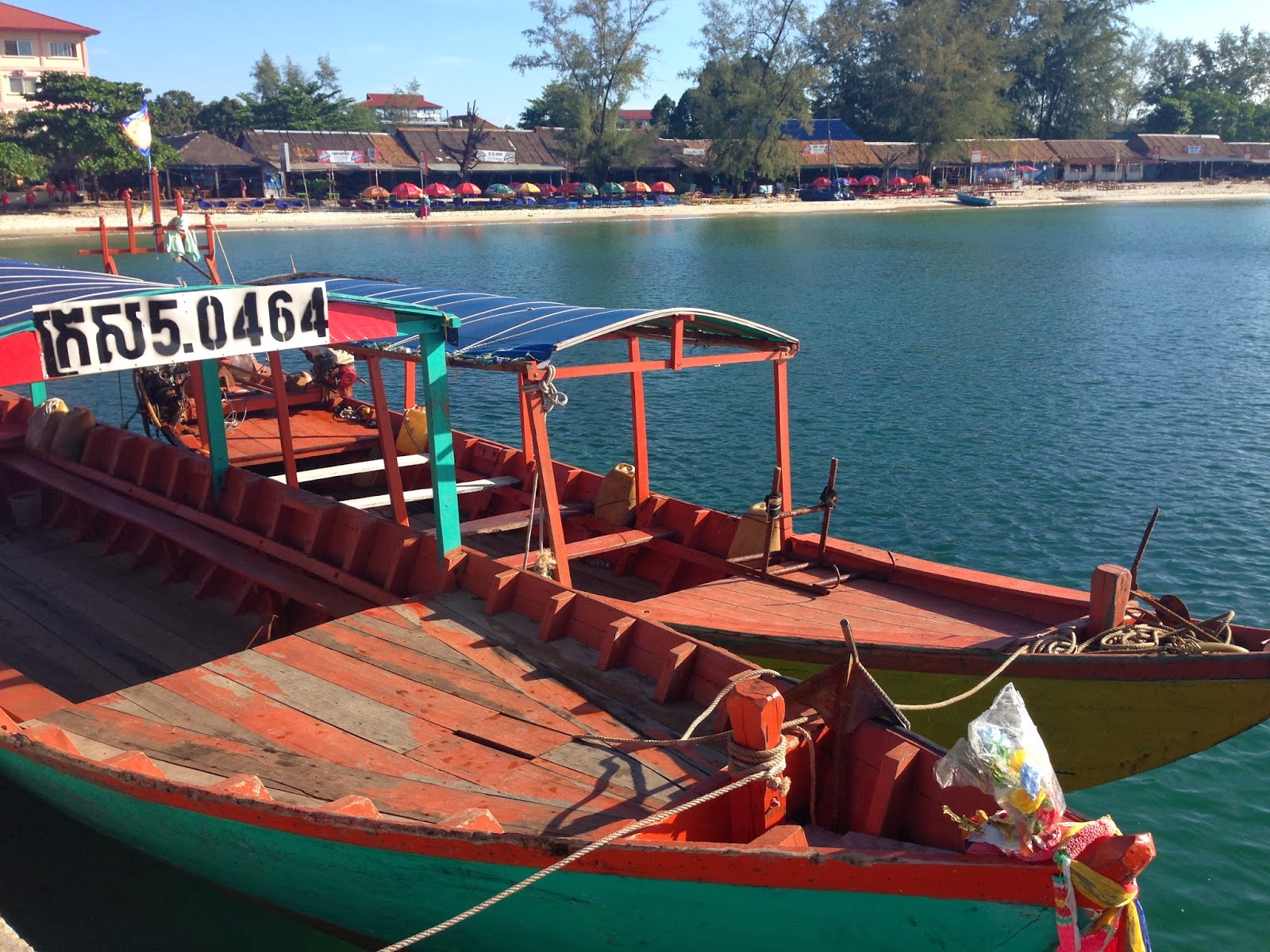 The next day half the group headed to Koh Rang Island and the other half stayed in Sihanoukville. We left at 8 am and were scheduled to arrive on the island by 10:30 am, so we thought. We actually arrived on the island at 2:00 pm after two stops and a lot of sick people. I threw up as well. It was awful and something I would rather not experience again. The boat captain did not apologize for his deception or the fact that he stopped at another island to drop off tiles for his business. He wanted us to be back on the boat by 3:00 pm. Frustrated and helpless, a few of us took matters into our own hands and paid $13 for a fast boat back to Sihanoukville. This boat left at 4:00pm and gave us a full two hours to enjoy the island. We made the most of it by sleeping on hammocks on the beach and indulging in some hamburger and french fries (I am still not satisfied by the fries here). It only took us forty minutes to get back! Instead of commiserating on our awful day we decided to sit on the beach and take in the beautiful sunset before heading to dinner. It was beautiful and relaxing! 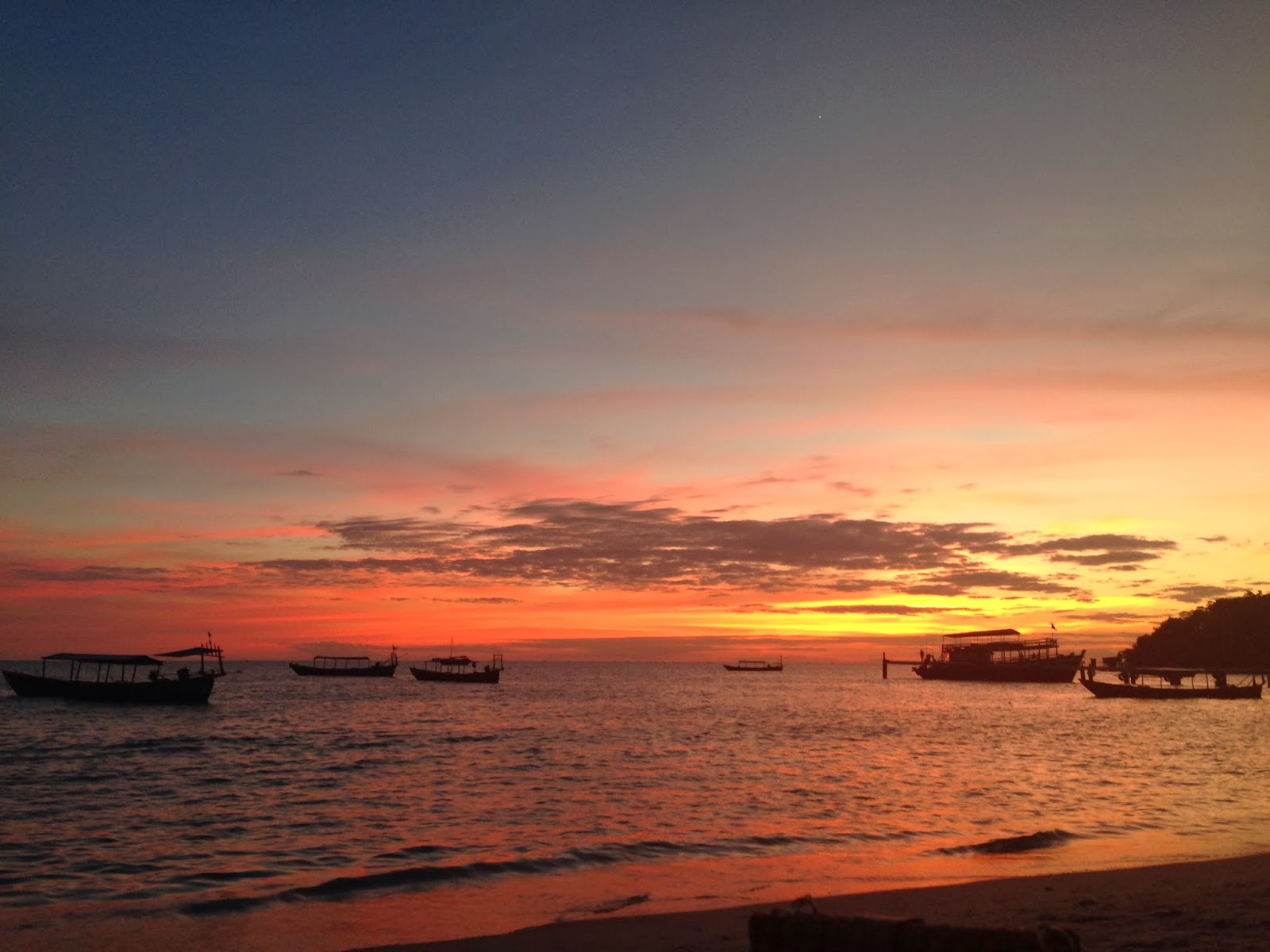 For dinner, the entire group headed to a Chinese restaurant and had some shrimp and squid dishes with fried rice. Very fattening but delicious. Afterwards,we all went to a KTV bar, better known as Karaoke. The kids had a blast and some of the adults sang too. I sang My heart will go on with Laetitia and Wanna be with four other girls. We were all pretty tired from our long day so we headed back to the hotel in an hour or so.
I woke up the next morning sore and in pain from all the bouncing I did on the bus and on the boat. We checked out right after breakfast and headed to Ream National Park. I said my goodbyes to Anjana, Srijana and Ujwal because they were heading to Siem Reap from Sihanoukville later in the day. 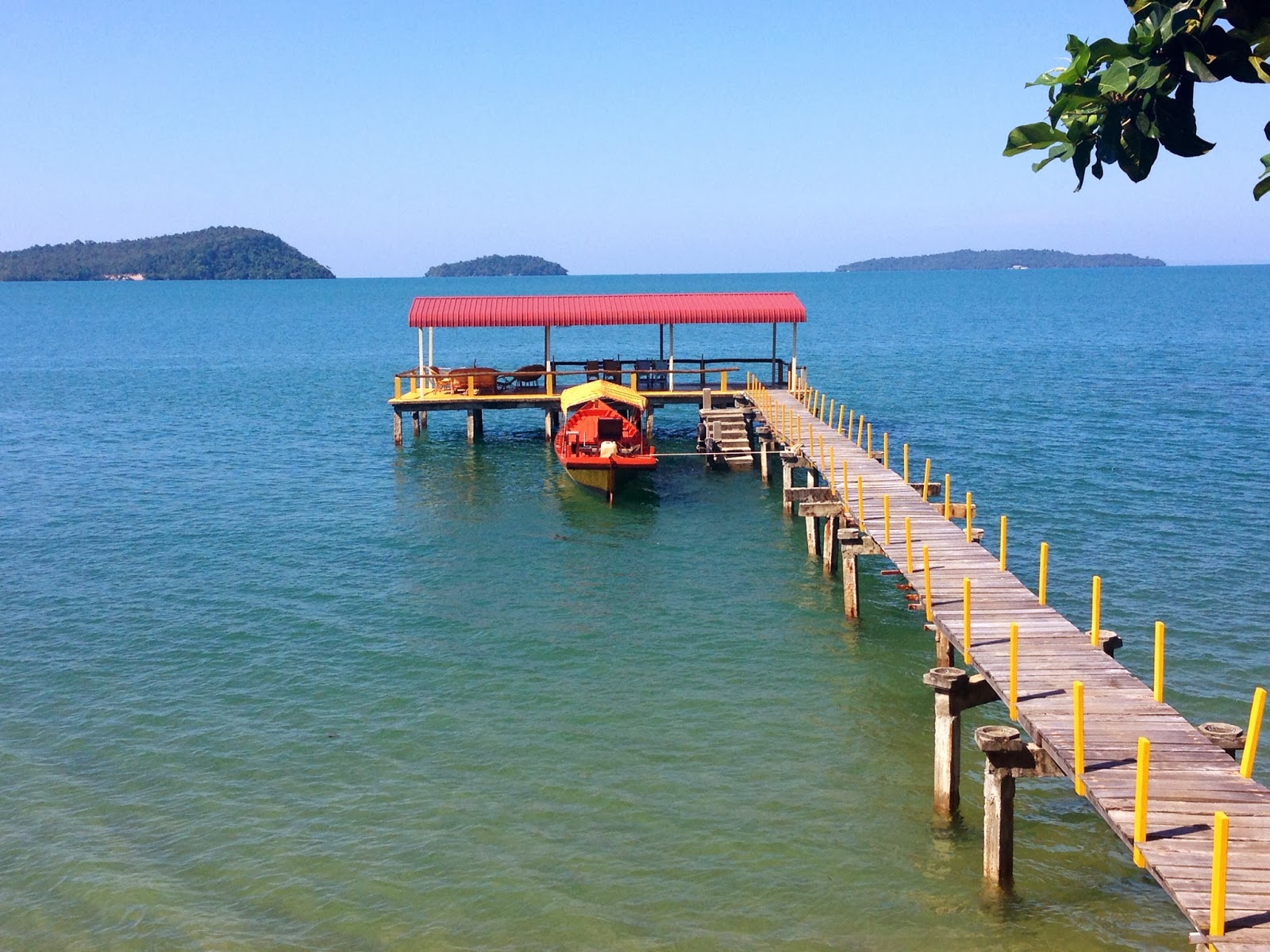 Ream is only 35 minutes outside of Sihanoukville and we spent most of our day there. We got there around 9:30am and stopped at a guest house and ordered shrimp, crabs and squid. They had cages outside on the water and after catching our meal they started cooking. Because the meal would take two hours or so, a few of us decided to walk around and explore. Laetitia introduced us to Ream guest house and its peaceful location. We ordered coffee and just sat and took in the view. 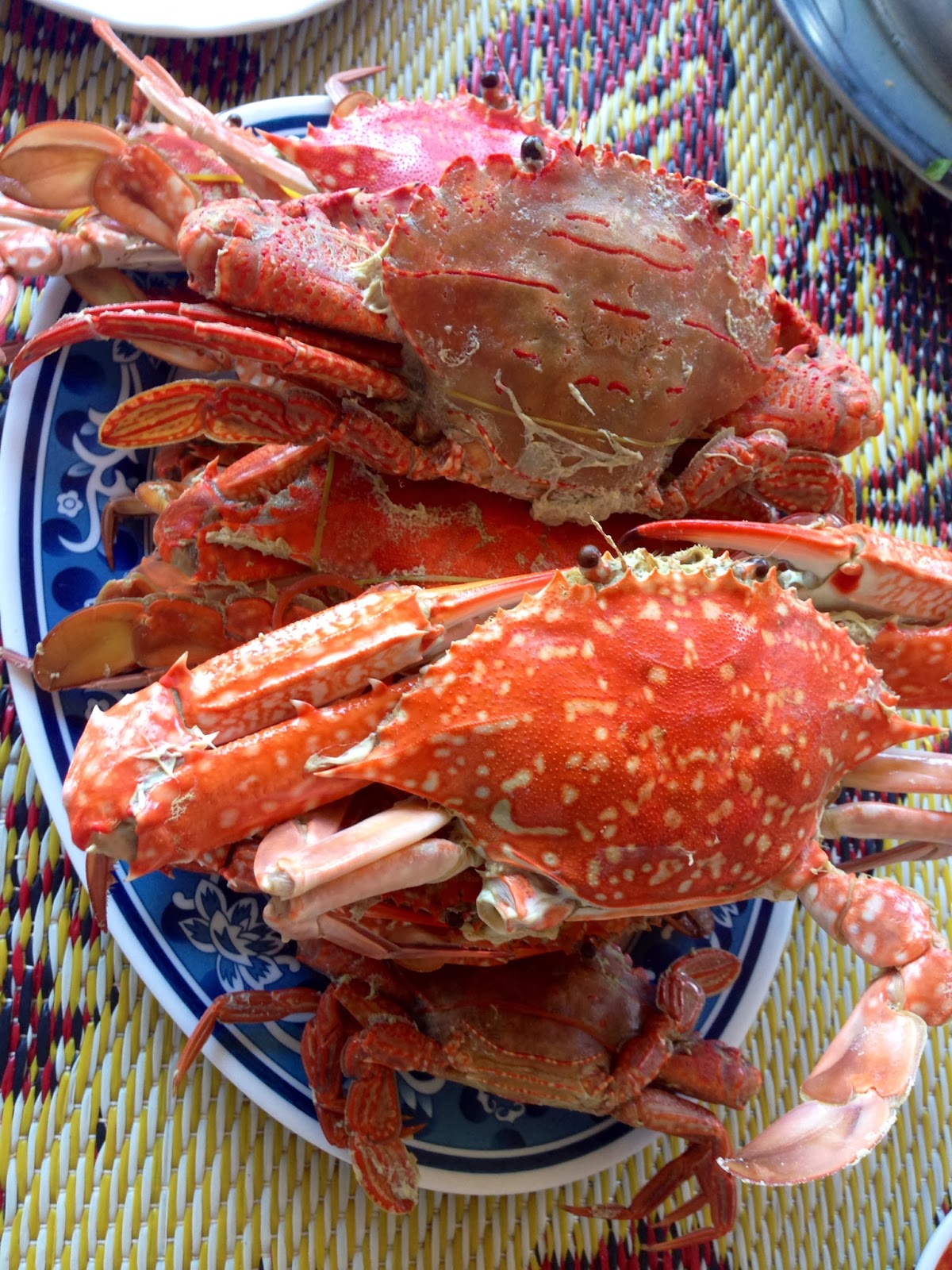 We timed our arrival perfectly with lunch and man was it delicious. I learned how to eat a crab! I thought I knew but I didn’t and had been throwing away so much meat. Again, we ate too much and slept on hammocks afterwards. I don’t understand why people aren’t fat here. We headed home and only made two more stops. Even though we ended up only completing one team building activity, I still feel like I learned a lot about the culture and my colleagues. We arrived shortly after 7pm and my lovely motodap driver was waiting for me. 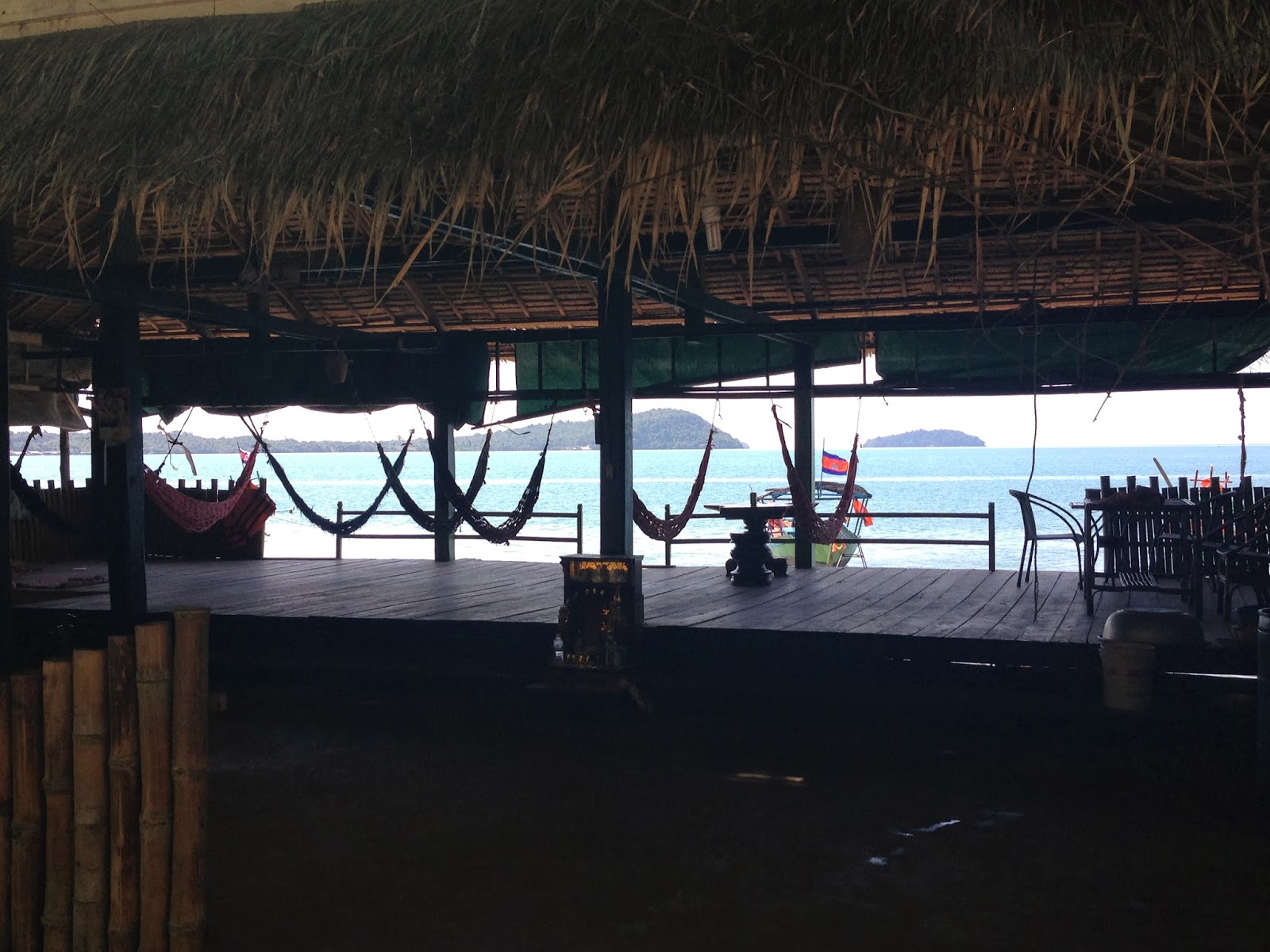 I woke up on Saturday with a cold, probably because the bus was freezing. Nothing major but annoying because it is 80 degrees outside and I am shivering. I spent all of Saturday in bed and missed a friend’s Christmas dinner. I hope I get better just as quickly as I got sick.
at December 22, 2013