Colorado is an amazing place. I am so glad Zach and Jess moved to Denver because I don't know if I would have been inspired to go otherwise.

Our trip began on Thursday, July 4th. Jess and Zach are proud new owners of a beautiful home in the hipster neighborhood of The Highlands. Their neighborhood has a local square, ice cream shops, boutiques and delicious restaurants.We started our day at The Universal for brunch.  Our waiter's name was Ara. He was quite a character and made our brunch much more fun because of the random things he would say. After a delicious meal and witty banter courtesy of Ara, we headed to Washington Park (equivalent to prospect park) and spent most of the afternoon there just relaxing  with some beverages and cheese and crackers. This park had city funded volleyball balls and nets everywhere. I swear, I did not see one fat person in Denver and this is probably why. We managed to get one competitive game going once John, Kevin and their gf's arrived. This was followed by dinner, drinks and ice cream. I think I had ice cream everyday. Mocha chip was my fav flavor! 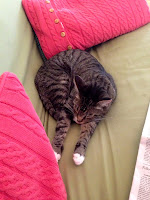 On Friday, Ahmed made us a beautiful omelette with eggs from 7 eleven. We all ate it politely but Jess and I were complaining about the eggs afterwards.   Turns out everyone hated the flavor of the eggs. I guess all our tastebuds are now used to cage free organic eggs. Zach and Jess went to work for a few hours and we relaxed at home. Ahmed went to a local coffee shop to bill some hours and I stayed at home with the cat and caught up on my nytimes and time magazines. It was so nice. Especially because their front porch is the most peaceful place ever. After he finished his project, we went to grab some lunch at a place featured in diner, drive-ins and dives and had AMAZING sandwiches. On our way back to the bus stop, we got rained on but then saw a woman carrying hot sauce in her cleavage and that just made our day! It was hilarious. I wanted to take a picture but was afraid I would get jumped. Zach and Jess were back by the time we got home and off we went to Colorado Springs to see the Garden of the Gods.

Before I get to the place, I went to talk about our car rides. Every car ride was filled with such insightful, thought provoking conversation that I think we loved this aspect of the trip more than anything else. They are so easy to talk to and just make you feel like you are in a protected space where anything can be shared.

Now back to the place. We got to Garden of the Gods and their visitors center had the 3 others a little worried about what tourist trap we were getting into. But my excitement level didnt waver. I had seen enough pictures to know what lied ahead. It was absolutely beautiful! How the rocks got there is a mystery but it was a sight that I am glad we got to see. It's a fairly small park so we decided to go for a hike to really get it all in rather than just drive around the rock formations. It was perfect, full of adventure, rain, laughter and of course confusion. We got lost but eventually found our way back just in time to catch the sunset and head home.

On Saturday, we made waffles at home before heading up to Boulder. Our first stop was Red Rocks Park. Apparently, local residents come here to work out in the mornings. The 4 of us were a little intimidated by what we saw and decided to leave pretty quickly. We drove to Golden and saw the Coors factory, nothing too exciting. Once we got to Boulder, we headed straight to the farmer's market and had some lunch and watched a local blue grass band perform. After that we soaked our feet in the creek and came across a sign for free sex, yup you read that right. Obviously, noone entertained the idea but it was amusing nonetheless. John, Amanda and John's friend Jason joined us at the park before the guys and girls separated. We headed to a thrift store and they headed to a brewery. Apparently, this is one of the best breweries out there. Zach, Ahmed, John and Jason were in heaven. We only knew this because of their social media postings and the random texts we were getting. We got a little concerned and decided to finish up our shopping (I got 3 beautiful dresses for $50!) and meet up with them.

The guys managed to try out the entire menu at Avery of about 25 beers for only $20 bucks each. They were beyond tipsy when we got to them but very happy. They had even purchased clothing from the brewery where each item was well above $40! I guess that's how they make their money. John, Amanda and Jason left for the Avett Brother's concert and the 4 of us decided to drive back through the Nederland's scenic route. The guys even skinny dipped in a lake! After which we stopped at a Nepali restaurant and had some chai and momos. The place was so amazingly authentic that I got emotional! It totally took me back to my time in Nepal and made me feel like I was on another adventure. At this point I realized, adventures don't have to be foreign they can be local too!

Sunday was dedicated to Rocky Mountain National Park. We got to Rocky Mountain and went straight to the summit where it was freezing and then drove back down past the Wyoming side of the park to a little above sea level to start our hike. The hike was only 5.6 miles and the view of the Mills Lake was amazing. We got to see elk, marmot and lots of beautiful wildflowers. Since we had been in Denver for a while the 11,400 ft elevation didn't really effect us.

The next day, Ahmed and I decided to explore downtown Denver. I made him walk everywhere. We had a great lunch at Panzanoas and icecream from Littleman's while covering all the major sights and then some. It was an absolutely perfect day. After a long day of exploring, we came home and went for dinner at a local farm to table restaurant called Root Down. I had ground lamb sliders and sweet potato falafel...i'll let you think about how good that meal was!


I can't believe how quickly the trip came to an end but it was a great vacation and we can't wait to go back next year!